I recently made the move over to dreamwidth! You'll find me here. I changed the blog name to beanstalk-sims to match my simblr. All of the posts have been moved across too, so any stories of mine are stored over there too.

I don't know if I'll be deleting this journal yet, but I will let you know if I decide to do that.

In the meantime, hope you're all okay! :)


Oops I took a sixth month break from playing and writing this?
I'd like to thank Past!Sam for already having written a quarter of this when I found it.

Eeesh, I really need to get better at updating.

While I disappeared, this legacy turned two. I've been sitting on this update for over six months, too.
(I never wrote captions for this one when I took the pictures six months ago, so I am winging it!)
( Collapse )

Hi guys! Hope you're all well - it's been awhile since I posted here.

So I've been playing this challenge where I aim to get all of the supernaturals with one guy and his family, and posting it on tumblr is seasonal 'updates'.

I've decided to post over here when an 'update' is complete, just in case anyone checks here who doesn't follow me over there.

Welcome to the thirtieth chapter! I know, right. Thirty! How crazy!

Firstly, I'd like to apologise for disappearing for like, five months. I don't really have an excuse other than, you know, life - so work, summer sunshine, going back to uni, working hard at uni...you catch the drift. BUT! We're so close to the end of the legacy, that I just can't call it quits.

Last time, Gwen and Elsa took their kids down the Bluffs for a family day. There was hedge woohoo, diving, talk about Marina’s boyfriend, and naps on stone benches. That night, Marina went out for a coffee only to have Elsa check up on her. There were birthdays, and Heath became a teen, and a member of the club. Heath decided to breathe some new life into the club by mixing it up a little. He finished the update by talking to cute party goer Paolo Rocca.

Yeah, I don't even remember all of that happening. So there's an index here, if you like.

OH! And the last chapter ended in the generation 8 heir poll - the winner of which is Heath! Thanks for voting!
( Collapse )


I played this challenge  back in April, after binge reading challenges whilst iIl over the easter holidays. I had to give the challenge a go, and completed it awhile ago - it's taken me this long to get around to sharing it.

I also wanted to serve it up in blog format, but I couldn't get photobucket to cooperate with me this evening, so you get a slideshare presentation instead. Let me know if there's any problems!

There's a boolprop thread, too, if you're into those.

So about a year ago, I was enthusiastically hoovering my room, and I knocked a glass of water over my red laptop, pretty much killing it. I lost a lot of stuff on it, important things like my CV (I think Americans say résumé?) and sims stuff, like my Riverside prosperity 'hood. I was pretty gutted about it all.

I got a shiny new laptop about a month later, and tried to pick up Riverside with just the gen 2 sims, which I'd saved to my box account. But it wasn't the same, I didn't have the same attachment, and I lost interest.

But! My rebuilding skills have improved, and a couple of days ago, I decided to put Riverside back together again - properly this time. I ended up really excited about it and stayed up ridiculously late sorting the 'hood out. It's *nearly* ready to play!

So I thought I'd do a post to remind you where we were at with the families. There was one update I didn't get to post before the 'hood was gone, and that was Dylan's last uni trip - he's since joined the regular rotation, so you'll find information on him at the bottom of the post. Each family is presented with their 'before' picture, taken at the end of the last rotation in the old 'hood, and the current picture, from the rebuild 'hood.

I also ended up with an additional member of generation 2, which I'll cover when I get to that family.

So here we are! Riverside rebuilt, in rotation order:
( Collapse ) 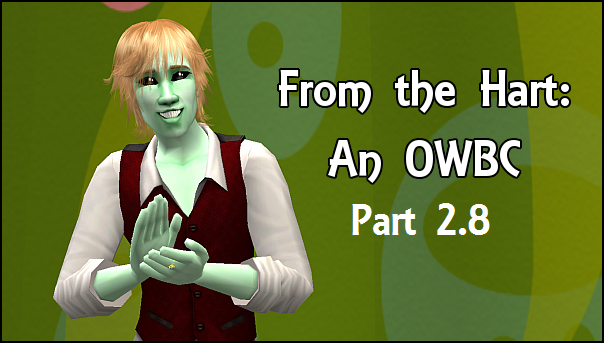